The dawn of reader revenue in Indian digital publishing 2021-09-15. India went under the COVID-19 imposed lockdown on March 24, 2020. The country’s digital news ecosystem witnessed a sudden surge in traffic that sustained for several months after.

News companies were forced to adapt to technology and mould their digital business strategies, which until then was a periphery business contributing to only a miniscule percentage of their overall revenue. Advertising, the primary revenue source, was hit by the pandemic and the newsprint distribution system was severely affected too.

The next few weeks saw digital revenues, which were also primarily supported by advertising, plummet dramatically. On the one hand, publishers observed a growth in their digital user base, which meant an increase in cost of servicing; on the other hand, ad revenues were declining at a rapid rate.

A year and a half later, several Indian publishers have formulated plans to put their digital offerings behind a paywall, with an overwhelming majority of legacy companies already charging for their e-paper websites.

Will Indians pay for online news?

Indians have indicated a strong interest in paying for digital news, according to Reuters’ India Digital News Report 2019.

Similarly, a whitepaper published by the World Economic Forum* in April 2020 indicated a huge likeliness amongst Indians to pay for news: 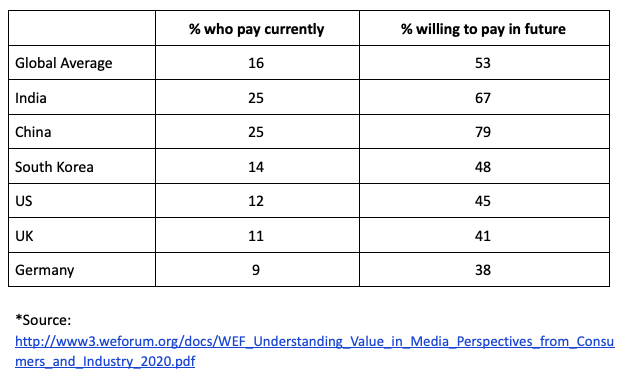 The Hindu Group, which has had its e-paper website behind a paywall for more than 6 years now and has taken its news website behind a paywall in February 2019, has reported a significant growth in its digital subscription revenue. In the financial year 2020-21 (April 1, 2020 to March 31, 2021), The Hindu reported growth of 147 percent in digital subscription revenue during the financial year 2019-20. Reader revenue accounted for 47 percent of its overall digital revenue in FY 20-21.

In June 2021, MoneyControl Pro, a digital native (with no print-based offering) reported 330,000 paid subscribers. The Ken, which was launched in 2016 as a digital native and has all its content behind a hard paywall, has sustained itself purely on reader revenue. Other digital natives such as The Print, The Wire, Scroll, etc. are trying a subscription model in line with The Guardian, appealing to their readers to contribute whatever they can, without locking any content behind paywalls.

Given the size of the Indian news industry, experiments from micro payments to long-term commitments from readers are being undertaken.

Relevance of e-paper in the Indian context

In markets such as the US, the household penetration of newspapers started witnessing a decline in the 1970s.

One can safely assume that now there is a generation, in developed markets like the US, that has grown without having subscribed to newspapers at all. In contrast, in markets such as India, print was growing as late as pre-COVID-19, and there is a strong connection between newspaper brands and their audience.

Between August 1 and 15, this year, The Hindu conducted an experiment; it offered the following three packages on the e-paper and its news websites:

However, on the e-paper website, the e-paper subscription was the most preferred choice, followed by the combo offer and there were very few takers for the news website subscription.

Tech giants are extending their full support to news paywalls in India. Google launched News Showcase, wherein it pays for licensed content from news publishers . It also supports many other initiatives aimed to help publishers under the Google News Initiative. Similarly, Facebook has taken many initiatives to help news publishers and may be exploring content deals with Indian publishers.

Indian publishers also have a gamut of choices when it comes to SaaS-based subscription solutions that can add significant value to publishers and can also cut down time-to-market. Companies such as Piano, Evolok, MPP, Vindicia, Recurly, Zoho, etc. are focusing on Indian markets and may develop customized products to cater to Indian needs.

COVID-19 has aggressively pushed digital adoption. As per a McKinsey Survey*, there is a 10+ year adoption acceleration for digital and digitally enhanced offerings in the Asia-Pacific region. This means that the talent required by the news industry to progress in its digital journey will be in short-supply, with costs shooting up considerably.

Given that publishers are already witnessing a steep decline in their revenues and have taken deep cuts in the cost structure, it will require great commitment on their part to stay committed and fund their digital aspirations.