The Sri Lanka Press Institute (SLPI), its constituents and affiliated organizations met with the Minister of Mass Media, Hon. Keheliya Rambukwella on Monday, 15th of March to submit an outline of the proposal for a single Authority to monitor the Media, including print, radio, television and digital based on self-regulatory principles that will ensure freedom of expression and social responsibility.

It is proposed that this new mechanism will be repealing the Press Council Act No 5 of 1973 and bring in relevant amendments to the relevant Acts such as the Sri Lanka Broadcasting Corporation Act, No 37 of 1966, the Sri Lanka Rupavahini Act, No 6 of 1982, the Sri Lanka Telecommunication Act, No 25 of 1991 and the Newspaper Ordinance of Sri Lanka, No 5 of 1839.

The proposed board of the Authority will comprise of media representative from the industry, state representation of media and subject matter experts from Finance, Law, ICT and New Media to ensure that today’s complex media environment is regulated and managed with the relevant expertise. The Authority, will ensure adherence of media to a Code of Conduct, hold inquiries on complaints received and of its own observation, issue broadcasting and content licences, registration of media, impose relevant fees, impose licence term, ensure conformity to content licenses impose fines and penalties based on inquiry.

The Minister said that he will include SLPI and all stakeholders who have engaged in this process to arrive at an outcome suitable to media and public. 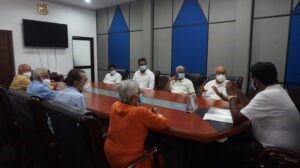 SLPI is organizing a series of training programs for journalists on how to report environmental issues in an effective manner. Registrations are now open...
Read more
News Room