2021-04-21. Industry leaders recently shared how they are powering the transition to new business models, reframing organisational culture and making the case for more diversity, equity and inclusion during a panel session at our recent Asian Media Leaders eSummit.

Above image: Post-pandemic, a majority of the staff of Sweden’s NWT Media wants to alternate between working from their regular workplaces and their homes, said Victoria Svanberg, President of NWT.

“When you are handling a company in a time of crisis, the positive way to look at it is that you actually have a carte blanche on doing anything that needs to be done to change,” said Meidyatama Suryodiningrat, President Director of Antara Indonesia, framing the issues to be discussed in this session of the Asian Media Leaders eSummit 2021.

Antara, a state-owned US$30 million media company, has 32 bureaus across Indonesia and is the country’s largest distributor of news content. Suryodiningrat said that media leaders should embrace the crisis the industry is facing under COVID-19 and use it as an opportunity to accelerate change.

Victoria Svanberg, President of NWT Media in Sweden, added that the digital transformation spurred by the pandemic is resource-heavy, but worth the effort.

“We have increased our digital reach during the pandemic by 50 percent,” said Svanberg. “And we are now the largest media group outside the metropolitan area in Sweden.”

NWT Media comprises 14 local media houses, and partially owns Norway’s Polaris Media, which is one of Scandinavia’s largest media groups with 59 local media houses. NWT uses a premium subscription model across their brands, with 70 percent of articles behind a paywall.

Svanberg went on to discuss  the group’s subscription retention strategy. First, an automated “welcome feed” sends emails with the latest news to registered readers who have been inactive on their platforms for a few days.

If users unsubscribe, NWT’s “win-back flow” is activated to encourage them to re-activate their subscription by showing them what news is on the site and sending them an exclusive subscription package with NWT’s e-magazines.

If they do not take up these offers, they are eventually contacted again during larger campaigns that are carried out a couple of times a year, said Svanberg.

Meanwhile Sophie Gourmelen, Managing Director and Publisher of newsbrand Le Parisien – Aujourd’hui en France (Today in France), which is a division of LVMH Group, shared that the paper saw a 63 percent increase in digital subscriptions in 2020 alone.

Le Parisien is the largest local newspaper in France covering Paris and its suburbs. It’s recent increase in digital subscriptions builds on a trend from the last few years, growing  from just over 8,000 in 2016 to 35,000 in 2020.

“The COVID-19 crisis dramatically accelerated our number of subscribers, but also accelerated our digital transformation, because we had to take some decisions in that period to put more content on the website than we would have done in a normal period,” Gourmelen said.

Le Parisien implemented a metered freemium paywall, moving from putting just 1 percent of its articles behind a paywall to 30 percent.

The publication now sends out 19 unique newsletters, which Gourmelen says are key to their digital transformation, comprising 1 percent of audiences but 10 percent of subscribers.

In May 2019, Le Parisien launched Code Source, a daily podcast that now has 800,000 listeners a month. This has also been key to subscriber retention, with Gourmelen sharing that subscribers who frequently listen to the podcast are three times more likely to remain subscribers.

“Of course, we’ve been inspired by The New York Times’ Daily, and Code Source is in a very modest way trying to follow what they are doing,” said Gourmelen.

Le Parisien also produces video content on Snapchat and Facebook that brings in 50 million views a month. These products have been key to Le Parisien reaching new audiences.

“Now when I ask young people what products they know from Le Parisien, they know the Snapchat food series, the Facebook cycling videos and the podcast. They don’t know anything about the website or the newspapers. Those people will hopefully come to us and pay for content on the website,” said Gourmelen.

She also explained how Le Parisien has overhauled its editorial strategy. A special online project called #LeParisien200000, which has the goal of reaching 200,000 digital subscribers in five years, seeks to gain new audiences with a refreshed editorial content strategy.

This revised strategy has seen the paper move from small local news to long reads, investigations, profiles and opinion pieces.

“We decided to increase the value of local news and give up small commodity news you could find everywhere to local news that have more impact and interest for digital audiences,” Gourmelen said.

The paper has also begun creating new web-only content for niche audiences – like people interested in the environment or Parisian football clubs – and subscriber-only categories called “Obsessions” – for example, “SentinELLE” for feminist struggles, “Intimacy” for sexuality and “Biclou” for cycling.

During the pandemic, NWT Media in Sweden found that readers wanted to see more local news and responded accordingly. “The closer to our readers we can be the better, because they want to see: How is the hospital in my area affected? How are the schools? How is the local shopping affected?” said Svengen.

The organisations also realised they had to invest in their staff, as well as change how work got done.

Also, instead of the old siloed model of IT management and product management being in separate departments, Le Parisien introduced multi-disciplinary “squads,” with these staff sorted into teams dealing with key issues of revenue, mobile apps, thematic channels and editorial. “This is helping us to deliver digital products more rapidly to the market,” she said.

Gourmelen also spoke about the challenges of changing the mindset of existing staff to adapt to new newsroom priorities.

“Things which helped us were we did not just have a digital project; we had a new editorial strategy and project, so it was a journalist’s project and not just a digital project coming from the geeks somewhere in the newsroom,” she said.

Regarding staff management and change, NWT’s Svanberg added, “It is not so much to do with age but the mindset, the curiosity and the willingness to do new things. Some of our older journalists are very enthusiastic about digital content. We have to be precise and clear from the management to be able to let them know what is important and give them the tools to do a good job.” 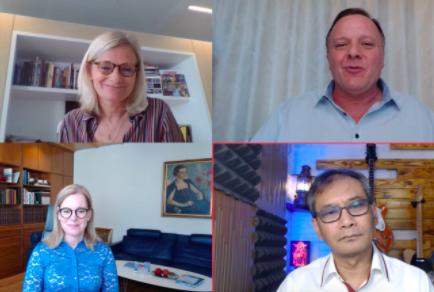 The panelists also discussed how to generate revenue from a greater variety of sources.

For example, state-owned Antara has 32 bureaus across Indonesia, and the group’s reach across the archipelago has been essential to revenue diversification, said President Director Suryodiningrat.

He shared that revenue from traditional newswire subscriptions account for less than 9 percent of Antara’s overall annual income.

Collaboration has been key for Antara, with the group leveraging their extensive national circulation network and working with major news agencies like Reuters, AFP and Bloomberg on distribution.

Suryodiningrat also said publishers should not dismiss the value of public spaces, sharing that Antara has capitalised on their 500 indoor media locations in public spaces like airports, hospitals and local government offices.

“I’m not going to go into the malls; I’m not going to compete with the private advertising agencies and so on. But you can imagine the value of having those things in the hospital over the last year,” he said.

“Content is all important but what you actually monetise is the distribution network,” said Suryodiningrat.

Svanberg said that NWT is exploring possibilities of diversifying their distribution network.

“We are also seeing new revenue opportunities from distribution, not least now due to the pandemic as more and more people choose to shop digitally, and have the goods delivered to their homes. Since we pass a large part of the households in our places of publication, it is convenient for us to carry packages and also mail at the same time,” she said.

Like all news organisations, the outlets also had to wrestle with the reality of people working remotely.

Antara, which provides mass COVID-19 testing for their 1,100 staff members, has shut down one floor in the building they were at and is renovating their office space to reduce occupancy.

Suryodiningrat sees this as a positive. In addition to reduced overheads, working from home has revealed how to define work by productivity and not process, he said.

NWT, meanwhile, surveyed their staff and found no difference in self-reported rates of satisfaction between those working from their regular workplace and those who were not.

NWT’s management staff has been just as productive working from home. “Post-pandemic, a majority of NWT’s staff wants to alternate between working from their regular workplaces and their home, ” said Svanberg.

“We believe we have developed more flexible ways of working, depending on which situation you’re in your life. If you have small kids at home, for example, you might want to work from home more than in the office and so on,” she said.

Panellists agreed that their organisations have had to become more agile in dealing with the challenges brought on by the COVID-19 pandemic.

“We had no choice but to jump, so we jumped. I don’t regret that at all. We are in a much better position now with new content and a new, fresh organisation to face new challenges,” said Le Parisien’s Gourmelen.

About the author: Alysha Chandra is a fourth-year student at Yale-NUS College.

About the editor: Bill Poorman is an editor, writer and media producer, currently in the US, after having lived in Singapore for six years until 2020.